For Council update on the Maesllyn, Croeslan route, promoted under Ceredigion on Horseback, with 10 gates along a distance of 0.9 mile, where a child recently had an accident at a dangerous gate, see below:-.

The gates on the upper end of the bridleway that are ‘new’ are in the process of being applied for by the landowner, these are being applied for as they don’t appear on the definitive map/statement and diversion order.  Gates/Path furniture in addition to those on the definitive map/statement and diversion order can be erected on a Right of Way subject to them meeting certain ‘tests’ e.g. for the ingress/egress of stock, and can be granted with conditions.  To this end the ‘new’ gates (3 and 5) have been installed for stock management purposes, as the landowners intend to graze the ‘woodland field’ in the summer (the area between 3 and 5 on this map) the recommendation on granting the gates is they are tied back when not in use (as they are now)  Gate 1 that is on an awkward angle and is overgrown has been cleared, this gate is on the diversion order, however a request has been made to tie this back subject to the bottom gate off that track being kept closed, there have been issues in the past from the landowner with this being left open. 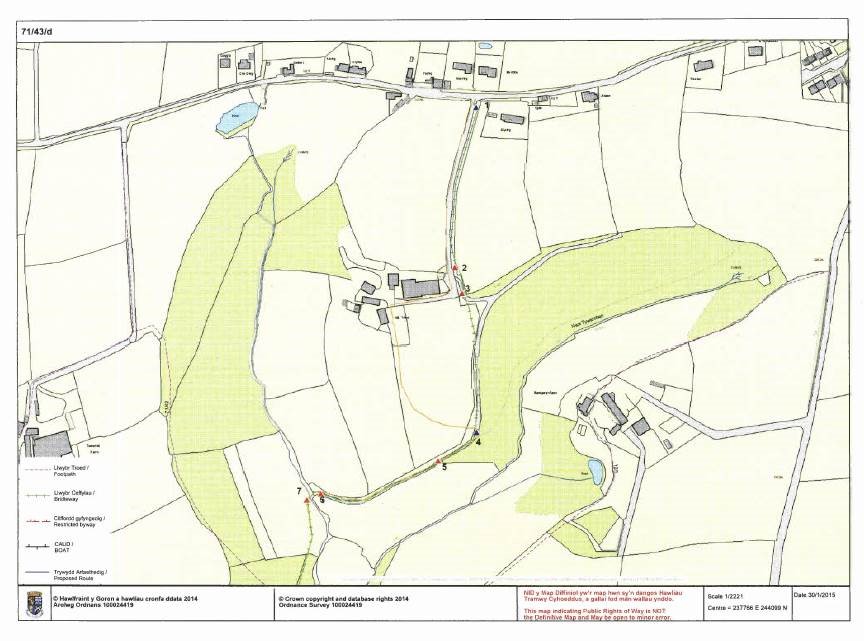 Point 4 is a historic gate that is no longer in place and replaces gate 5.  Gate 6 has been installed to allow containment of stock for handling and will be tied back when not in use as is at present.

All the ‘new’ gates will have council supplied Easy Latches on the 5ft gates (to be placed in the gaps adjacent to the field gates in place at points 3 and 5) and field gate at point 6.

The gate from the field into the wooded area has been trashed to remove brambles, has been adjusted and a new auto latch installed for ease of use.

The tree blocking this next section has been removed and clearance on the brambles has been started. This section is on the council brush cutting contract and will now routinely be cleared in June and August to keep overgrowth down.  More trashing is required at this end and at the top, volunteer help would be much appreciated.

The electric wire by the wooden gate has been removed.

I am in discussion with the landowner at the lower end (Abernant) re the metal gate and drop to side of it, and looking at possible solutions.

Please be assured the department is working hard to find a balance between the user and the landowner. As the situation progresses I will update further.

Extract from a press release 10th November 2014 :Boost for Ceredigion’s Bridleways and Tourism

Horse riders, cyclists and walkers can now enjoy and follow a series of rural routes easily thanks to Ceredigion’s County Council's Equestrian Tourism Route Improvement Project ‘Ceredigion on Horseback’ supported by the Rural Development Plan for Wales 2007-2013 which is funded by the Welsh Government and the European Union.  The Ceredigion on Horseback Project has seen improvements to bridleway networks throughout the whole of the county.

The project has created twelve circular routes and one linear route crossing the county for horse riders using the existing bridleway network and quiet lanes.  Over 75 miles of bridleways, Byways Open to all Traffic and Unclassified Roads have been transformed by the funding over the last three years. The improvements carried out included resurfacing using locally-sourced stone, improving gateways, provision of bridle-gates and over 225 horse friendly latches, waymarking, signposting, clearing ditches and renewing culverts using local contractors. The Project worked extensively with volunteers completing improvement works on the ground, vegetation clearance and installing new path furniture.  Volunteers contributed over 1500 hours to the project and were drawn from a variety of areas; members of Lampeter, and Aberystwyth Ramblers, Volunteer Groups, Ceredigion Bridleways Group as well as other individuals have all contributed towards the success of the project.

By improving these routes, the Council is helping to protect riders by providing them with a safer network off the roads, to promote both active living and encourage Equestrian Tourism.  The project has encouraged the development of facilities for horse tourism i.e. Bed & Breakfast /Stabling.  Improvements to infrastructure will provide the additional benefit of helping the wider community to access the countryside.  Linking up with existing bridleways and byways, the routes provide an extensive off-road network.  It is hoped that the creation and promotion of the new routes will help to boost equine tourism in Ceredigion, attracting horse riders from further afield who will use local accommodation and services whilst visiting the county.  The creation of these routes would not have been possible without the continued involvement of Ceredigion County Council’s Coast and Countryside Team, providing support and expertise, processing diversions and promoting and launching the routes through the development of route booklets and dedicated Equestrian pages on the www.discoverceredigion.co.uk website.  The booklet ‘Ceredigion on Horseback’ can be obtianed from Local Tourist Information Offices, the council office in Penmorfa Aberaeron and downloaded from the discoverceredigion website.

'It has been great to work with Sarah Pinnell on The Ceredigion on Horseback Project helping improve some long-forgotten bridle paths. Visits to previously inaccessible locations, many with spectacular views of cwm, coast and countryside, have often been ample reward in themselves for all the hard work. We hope that lots of riders and walkers will now also enjoy the delights of scenic Ceredigion that these newly-opened routes offer.' Ramblers / Rights of Way Volunteers Aberystwyth

“The Ceredigion on Horseback Project has done absolutely wonderful work. Horse riders now have a fantastic network of bridleways enabling them to ride for miles, with the minimum of main roads, which are getting increasingly more hazardous for any horse, whether they are quiet in traffic or not, to venture out on. “

A Spokesperson from Ceredigion Council Said

“The Ceredigion on Horseback project has successfully achieved its remit to enhance Ceredigion’s opportunities for Equine Tourism, having worked with Tourism entities, improved public rights of way and created route networks publicised through the booklet. Improvement and development work is required on other bridleways in the county as resources permit. “

ROUTES:Completed this year by 'Ceredigion on Horseback'

Tyn reithin routes now open -restored November 2013 by the 'Ceredigion on Horseback' project
Penbryn bridleways restored October 2013 - "Path 65/15 is in the process of being opened for use on Horseback, the gates are  completed and the path will be waymarked this week and signposted in the near future.  The path needs time to settle, and we may need to revisit in the Spring if it needs further work, it will give another loop to enjoy.The other two paths in the area have had considerable improvements made to them in recent months so they should prove better to use." Sarah Pinnell 'Ceredigion on Horseback'. 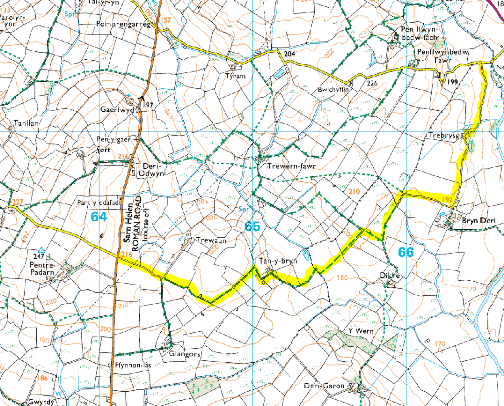